Two legends in economics wrestle over the euro's future 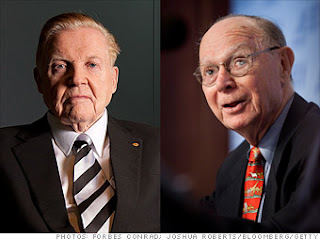 Robert Mundell and Allan Meltzer rank among the most influential economists of the past half-century. Mundell, a professor at Columbia University, garnered a Nobel Prize in 1999, in part for his work in defining what he calls "optimum currency areas." No academic has ever enjoyed such success seeing his theories into practice: He's variously called the "father" or "godfather" of the euro. The intellectual architecture that Mundell created for the single currency was a major force in winning over skeptical politicians and economists, and, until the recent crisis, appeared to have transformed the 17-nation eurozone into a juggernaut rivaling the U.S.

Meltzer is a highly influential monetarist who authored A History of the Federal Reserve, lauded as the most comprehensive chronicle of the central bank. He served as a Treasury official in the Kennedy administration and on President Reagan's Council of Economic Advisors. Meltzer strongly opposes what he views as our current, improvisational monetary policy targeted at such short-term goals as boosting housing or equity prices, when the inevitable price will be far higher inflation.

Mundell, 79, is the more theatrical of the pair, having serenaded folks at his Nobel banquet with a stanza from Frank Sinatra's "My Way."

Now, Mundell and Meltzer are taking diametrically opposed positions on today's biggest economic issue, the future of the euro. I was unable to speak with Mundell, who emailed me to say he was in Europe, where he summers in a picturesque villa in Tuscany. But examining his many recent interviews and articles gives a clear view of both why he still believes in the euro's benefits, and his solution to the crisis.