The Real Risk in the Euro Zone Is Political 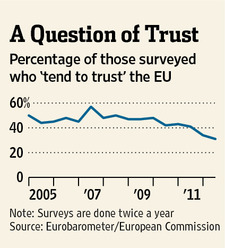 When all you have is a hammer, every problem looks like a nail. The European Central Bank has taken aim at the convertibility risk it thinks has driven Spanish and Italian bond yields higher—and has hammered short-maturity yields back down. The ECB's toolbox can contain market pressures related to fear of a collapse of the euro. But it is ill-equipped to manage political risk.

The ECB is aiming to address one scenario related to convertibility: the fear that market tensions lead the euro-zone crisis to spiral out of control, with Spain and Italy potentially facing funding crunches and Europe's bailout funds proving inadequate to deal with them, forcing the euro zone into a life-or-death, fiscal-union-or-bust decision. The apparent potential for ECB bond purchases has reduced the risk of this disaster scenario.

But there are other important factors. One is the perception among investors and executives of convertibility risk. Investors are split evenly on whether Greece will leave the euro in the next 12 months, a Citigroup poll of 440 clients shows. Companies are taking action: International Consolidated Airlines Group, the parent of British Airways, Spain's Iberia and bmi, says it has started a Spain euro exit roadmap project, and cut exposure to Spanish banks to 3% of total exposure from 27% in just six months. These perceptions and actions risk becoming self-fulfilling.