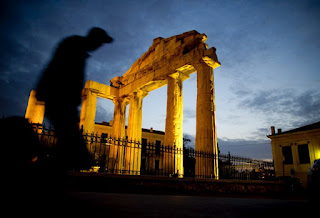 The European Central Bank is now taking risky measures to help save Athens from its acute financial emergency. Increasingly, euro-zone leaders are pushing the dirty work on the ECB. In the end, though, they will likely have no choice but to pay Greece the next tranche of its bailout package.

"There is no time to lose," Jean-Claude Juncker warned just a few days ago. Leaders must use "all means at their disposal" to save the currency union, the head of the Euro Group said. But one thing is becoming clear: Politicians are increasingly pushing the dirty work on to the European Central Bank (ECB).

Take Greece, for example, where liquidity is becoming scarce. The government in Athens needs to repay a maturing bond worth €3 billion ($3.7 billion) to the ECB by Aug. 20. The solution to that problem seems paradoxical: The ECB itself is pumping money into Greece, so that the country can in turn repay the ECB.

It's a controversial plan, because the central bank is prohibited from financing governments directly. As a result, no one is talking openly about the absurd flows of money. The ECB has only hinted that it will extend a helping hand to Greece.

Now, information has leaked regarding how the ECB plans to keep Greece on its feet until the next tranche of European Union-International Monetary Fund aid is paid out. The ECB has chosen a detour via the Greek central bank. It will allow it to issue additional emergency loans to the country's banks. These in turn are supposed to use the money to buy up Greek bonds with short maturities. This will scrape together €4 billion, according to the plan.

The Greek central bank will accept the dodgy bonds as collateral, and will provide the country's equally troubled commercial banks with freshly printed euros -- which ultimately come from the ECB.