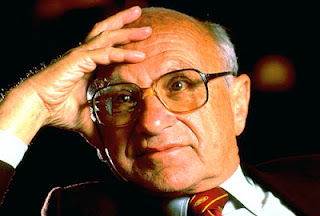 A common currency is an excellent monetary arrangement under some circumstances, a poor monetary arrangement under others. Whether it is good or bad depends primarily on the adjustment mechanisms that are available to absorb the economic shocks and dislocations that impinge on the various entities that are considering a common currency. Flexible exchange rates are a powerful adjustment mechanism for shocks that affect the entities differently. It is worth dispensing with this mechanism to gain the advantage of lower transaction costs and external discipline only if there are adequate alternative adjustment mechanisms.

The United States is an example of a situation that is favorable to a common currency. Though composed of fifty states, its residents overwhelmingly speak the same language, listen to the same television programs, see the same movies, can and do move freely from one part of the country to another; goods and capital move freely from state to state; wages and prices are moderately flexible; and the national government raises in taxes and spends roughly twice as much as state and local governments. Fiscal policies differ from state to state, but the differences are minor compared to the common national policy.

Unexpected shocks may well affect one part of the United States more than others -- as, for example, the Middle East embargo on oil did in the 1970s, creating an increased demand for labor and boom conditions in some states, such as Texas, and unemployment and depressed conditions in others, such as the oil-importing states of the industrial Midwest. The different short-run effects were soon mediated by movements of people and goods, by offsetting financial flows from the national to the state and local governments, and by adjustments in prices and wages.

By contrast, Europe’s common market exemplifies a situation that is unfavorable to a common currency. It is composed of separate nations, whose residents speak different languages, have different customs, and have far greater loyalty and attachment to their own country than to the common market or to the idea of "Europe." Despite being a free trade area, goods move less freely than in the United States, and so does capital.

Yes a common currency like the Euro might be a good economic interconnection for all its nations under a tight controlled political and economic circumstances. Sadly at this time economic time Euro-land has too many political and economic difficulties that mean it was (with hindsight) unwise to implement a single Euro currency, without greater rigour. The distracting prize for the Euro elite was to be the second choice international reserve currency behind the US dollar. Historically, back in the relative good times of 2002 the seventeen nations believed that if they met a series of economic gates then all would be well and did not need to merge economies. Initially the gates for merging currencies were perceived to be met and confidence was high. Over time and other World events outside the control of those in Europe started to damage the economic performance for some member states. The problems of constituent nations began to effect Euro exchange rates and therefore all the nations.
The member nations had been thought of effectively as seventeen families and so far have not demonstrated a need or desire to merge into one large family with one budget, one taxation system, one culture and one language. The people do not appear to want to abandon their existing nation states, communities, methods of communication culture and class systems for a “united Euro family.” The history each nation brings to the currency union in terms of debt, taxation, welfare state and debt management is significantly different and therefore their economic needs are different. The "loco"-motives for commerce across all seventeen nations are different, albeit subtly. The volume, velocity and volatility of each of the seventeen nation’s economies are subtly different both in terms of size of deal, speed of churn and trading priority. The approach to savings and credit between each nation will be different. The approach to knowledge, information management, technology and entertainment are different within each of the member states and will be impacted by language. Seventeen countries with more than one language means there may be subtle differences in meaning that can be lost during translation and lead to misunderstanding or deliberate obfuscation when required.
For the Euro to flourish there needs to be a greater control and management of the currency that comes from a unity of purpose. Too much political and economic merger (or even austerity) may lead to a cultural merger shock among the nation / families! To make the Euro work there is an opinion that it needs a whole generation of root and branch political and economic amalgamation and there is insufficient evidence of a desire amongst the people of Europe to make it work. Time after time the Germans were expected to help out weaker nations who were members of the Euro. Are the Germans prepared to be poorer for the benefit of the other sixteen nations? The whole experiment is too tough on too many people and does not have sufficient mandate from the people to make it work. The Euro currency at this moment in time without economic and political unity is appearing to be a mistake and is damaging all Euro member countries economic confidence and therefore economic growth. Ostrich like head in the sand denial from politicians that the Euro was a house (at this time) built on economic sand when facts tend to suggest otherwise doesn't underpin the currencies existing foundations. Is the prize of a Euro reserve currency worth the price for the peoples of Europe?