Tension Over Aid to Greece Could Unsettle Markets 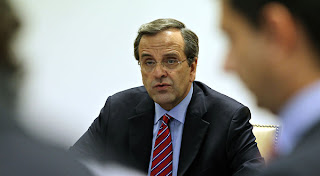 While the Greek prime minister, Antonis Samaras, will be greeted with military honors when he arrives in Berlin on Friday, his pleas for easier bailout terms could meet with a cool reception, setting up tension that could unsettle the financial markets next week.

Their summer vacations over, European political leaders appear to have resumed the maneuvering that has so often caused market turmoil and frustrated outsiders hoping for a quick solution to the euro zone debt crisis.

Mr. Samaras, who leads a fragile coalition, is under intense political pressure at home to provide relief from the austerity that has made life tough for many Greeks. Amid continuous political turmoil and depressionlike economic conditions, Greece has not been able to meet the timetable to get government spending under control or carry out changes intended to improve tax collection and create a better climate for business.

During a week that will take him to Berlin and Paris, Mr. Samaras is expected to ask for a two-year extension for Greece to meet its budgetary and reform commitments. He is scheduled to meet with Angela Merkel, the German chancellor, on Friday, and François Hollande, the president of France, on Saturday.

More
Posted by Aristides N. Hatzis at 8:49 AM