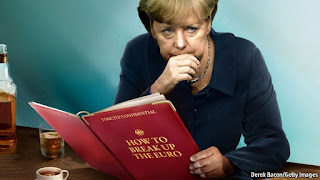 For all you know, Angela Merkel is even now contemplating how to break up the euro. Surely Germany’s long-suffering chancellor must be tempted, given the endless euro-bickering over rescues that later turn out to be inadequate. How she must tire of fighting her country’s corner, only to be branded weak by critics at home. How she must resent sacrificing German wealth, only to be portrayed as a Nazi in some of the very countries she is trying to rescue.

But for this very practical woman there is also a practical reason to start contingency planning for a break-up: it is looking ever more likely. Greece is buckling (see article). Much of southern Europe is also in pain, while the northern creditor countries are becoming ever less forgiving: in a recent poll a narrow majority of Germans favoured bringing back the Deutschmark. A chaotic disintegration would be a calamity. Even as Mrs Merkel struggles to find a solution, her aides are surely also sensibly drawing up a plan to prepare for the worst.

This week our briefing imagines what such a “Merkel memorandum” might say (see article). It takes a German point of view, but its logic would apply to the other creditor countries. Its conclusions are stark—not least in terms of which euro member it makes sense to keep or drop. But the main message is one of urgency. For the moment, breaking up the euro would be more expensive than trying to hold it together. But if Europe just keeps on arguing, that calculation will change.