Spetses, the tycoons' playground where gulf between rich and poor grows wider

On a jetty alongside the town beach a loud phone call disturbs the peace of a handful of Spetses residents lying in the sun before taking their daily swim – one free pleasure that is still available to all. A rich weekender from Athens booms ostentatiously into his mobile, directing a man behind the wheel of a sizeable speedboat. "Just ignore the line of buoys," he says, "and steer straight over to me so we can talk." The instruction provokes a furious reaction from locals, who yell out angrily that boats are never allowed to come so close to the swimmers. A nasty row flares up – a sign of growing social tensions on an island where poor locals live cheek-by-jowl with the holidaymaking rich.

Antonis Samaras, the Greek prime minister, spent last week pleading with European leaders for more time to implement the severe austerity programme that is, ultimately, the condition for Greece remaining in the euro. Back home, and on islands such as Spetses, those well-off Greeks who remain financially cushioned from the effects of the deepening crisis, and from the fresh austerity measures due to be imposed next month, are the targets of growing fury.

The Saronic isle, with its pretty horse buggies and flowery villas, has been chosen as the location for a new Greek tourism advert, designed to reassure international visitors that the beaches and the bobbing fishing boats are still waiting for them, despite the economic meltdown. Yet the place is also a microcosm of the country's troubles: 30 square miles that encompass unimaginably big gaps in income.

While Athenians can enjoy browsing in the expensive deli that has replaced the souvlaki outlet in the square, the majority of Spetsiots can no longer afford to eat in local restaurants. The price of food in supermarkets and shops has soared. 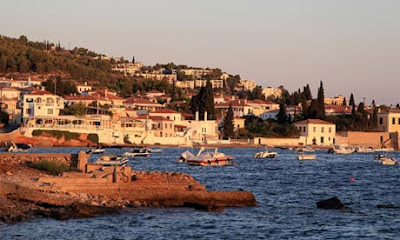 Posted by Yulie Foka-Kavalieraki at 2:55 PM