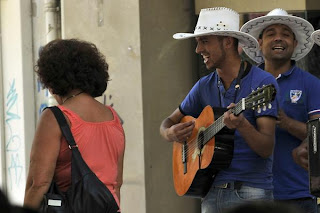 The euro crisis stems in part from countries like Greece not collecting taxes on a sizeable 'shadow' economy. These off-the-book activities need to be brought into the light of legal, taxable commerce.

Anyone looking for a way to help Europe reverse its shrinking economy – and thus save the global economy – might first note some odd behavior in the Greek city of Larissa.

In a report last June, three American researchers found Larissa not only ranks as one of the districts with the highest tax evasion in Greece, it also has the highest density of Porsche luxury cars in all of Europe.

Larissa’s not-so-hidden wealth reveals a sizable hidden economy in Greece – one that remains largely untaxed. And, oh by the way, the low tax revenue happens to be a big reason why Greece’s debt is dragging down the other 16 nations in the eurozone.

The same study found nearly a third of the Greek deficit can be traced to tax evasion and corruption. Greeks, at least until recently, were earning nearly double what they report. And in a telling correlation, occupations with the highest tax evasion – such as engineers, private tutors, accountants, and lawyers – were also highly represented by members of Parliament.