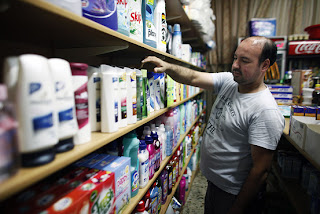 The crisis afflicting the euro zone's weakest economies can be described simply: Everything became too expensive.

Labor costs rose too high, which is why wages needed to fall. But so did the cost of groceries, transportation, housing and dozens of other goods and services. Fast-rising prices in the crisis-hit countries sapped their economic competitiveness during the first decade of the euro, eventually causing growth to suffer and unemployment to rise.

Has the problem been fixed? Not really. Going into the third year of the region's debt crisis, prices in the euro-zone "periphery"—southern Europe, Ireland and the Baltic countries, which peg their currencies to the euro—are still too high. That is a big problem for policy makers hoping economic growth can return to the periphery in a year or two.

Why the focus on prices? The euro zone's first decade saw inflation in the periphery run consistently higher than in Germany—transforming Germany into the bloc's low-cost production center. To regain competitiveness after the crisis, prices in the periphery needed to fall relative to Germany and the other strong euro-zone countries, such as the Netherlands and Austria. 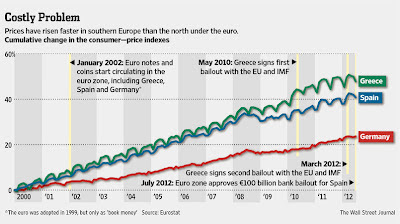 Posted by Yulie Foka-Kavalieraki at 12:58 AM