In Euro Crisis, Fingers Can Point in All Directions 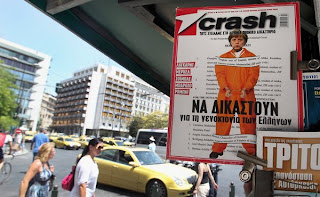 The debate about how to distribute the cost of preserving the euro often centers on a fundamental question that is unspoken but implicit: Who caused this crisis anyway?

A hint: It wasn’t just the Greeks.

In Germany, however, the prevailing stereotype is that the dissolute Greeks squandered the privileges of euro zone membership. There is a palpable resentment among German taxpayers who feel they are being asked to pay for the sins of the Greeks as well as the Spaniards and Italians.

It is, of course, not that simple. While it is true that a series of Greek governments bears a large share of the guilt for the euro crisis, for mismanaging their economy and finances, there are plenty of other culprits. They include the German and French banks that lent Greece money and fueled the Spanish housing bubble, and the European political leaders who, more than a decade ago, introduced the euro even though they knew it had basic flaws.

The circle of perpetrators could also include the fickle bond investors who underpriced the risk of Greek debt before 2010 and whose volatile reaction to even minor events has lately been wreaking havoc with Spanish and Italian borrowing costs and, by extension, those countries’ economies. It could include the bank regulators and national governments that created incentives for European banks to load up on European government bonds. 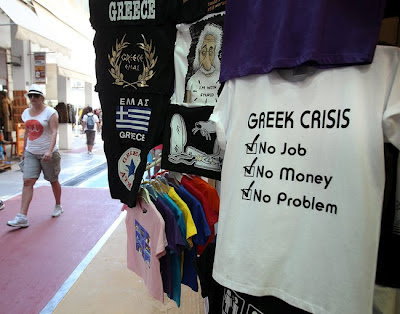 Posted by Yulie Foka-Kavalieraki at 11:11 PM