How the ECB Plans to Use Its Bazooka 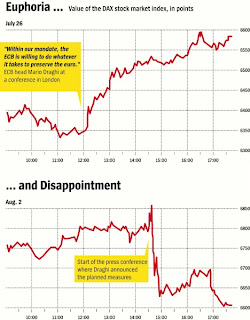 Until recently, Mario Draghi was regarded as a man who understood the markets. The head of the European Central Bank (ECB) worked at investment bank Goldman Sachs for years, and he had studied under such renowned economists as Paul Samuelson and Franco Modigliani. At receptions in Frankfurt, the German banking capital, the elegant Italian was as adept at discussing the latest accounting guidelines as he was at talking about golf handicaps. He was known in the financial world as "Super Mario."

That reputation has been tarnished since last week. Shortly after Draghi began a highly anticipated press conference last Thursday, following a meeting of the ECB Governing Council, stock prices plunged and there was talk of "frustration," "irritation" and "cold showers" in the world's financial centers. A broker on New York's Wall Street railed that the ECB chief had treated investors like a bunch of "idiots."

In fact, Draghi had done the worst thing a central banker can do to traders: He had disappointed their expectations. Stock and bond prices had been going up for a week after Draghi had suggested, at a conference in London, that the ECB would soon be buying up Southern European sovereign bonds on a large scale once again.

But when Draghi appeared before journalists in Frankfurt last Thursday, there was no talk of quick purchases, but rather of "conditions" for the debtor countries. The central bank chief mentioned various "options" that could be extensively reviewed by commissions and possibly implemented at some point -- "could" being the operative word, rather than "must." Instead of "Big Bertha," as Draghi otherwise likes to call his rescue programs, this time he was offering the markets something with a somewhat smaller caliber. 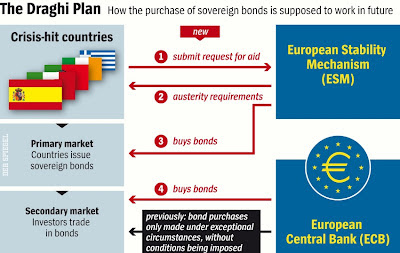 Posted by Yulie Foka-Kavalieraki at 1:50 PM