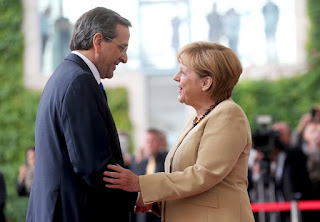 Greek Prime Minister Antonis Samaras, who met with German Chancellor Angela Merkel on Friday, says his country needs more time to meet its obligations. German editorialists argue that asking for more time amounts to asking for more money and insist that Greece should stick to the schedule.

Greek Prime Minister Antonis Samaras had been expected to make his case for more time to meet austerity targets in his meeting with German Chancellor Angela Merkel in Berlin on Friday. Samaras has said he wants an additional two years, until 2016, to trim €11.5 billion ($14.3 billion) from the Greek budget.

But if Samaras had been hoping for quick concessions from Berlin, he didn't get them. Although Merkel reassured Samaras that she wanted Greece "to stay in the euro zone," she gave no sign of wanting to grant Athens more time to meet the terms of the bailout.

Merkel did, however, say that Germany would not "make premature judgments" about Greece's reform efforts, but would await "reliable evidence," a reference to the report by the so-called troika -- made up of officials from the the European Commission, the European Central Bank and the International Monetary Fund -- which is expected in September or October. "We know that great sacrifices are being demanded from Greece's citizens," Merkel said, adding that Berlin supported the efforts of the new Greek government under Samaras.