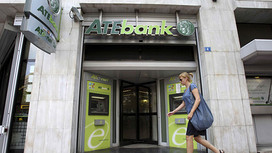 A political row has erupted in Athens after the former head of a big Greek state bank admitted to transferring €8m of personal savings abroad to buy a London property months before his Agricultural Bank headed towards insolvency.

Theodoros Pantalakis, former chief executive of Greece’s Agricultural Bank (ATEbank), strongly denied any wrongdoing, telling Realnews, a Greek website, that he had declared the transaction to authorities in 2011 and had paid tax on the amount transferred.

“I’m on holiday and I don’t plan to say anything more until I come back to Athens,” Mr Pantalakis told the FT from his villa on the Aegean island of Paros. He is expected to testify on his three years at the helm of ATEbank before a parliamentary committee at the end of August, said a person with knowledge of the dispute.

Dozens of wealthy Greeks, among them politicians, bankers and shipowners, have bought high-end properties in London in the past three years seeking shelter from the country’s deepening debt crisis, which has left millions of ordinary Greeks squeezed by tough austerity measures.