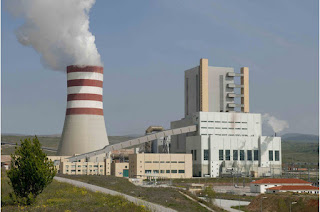 In the mountains of northern Greece lies an $800 million power plant whose future may help determine whether the country can salvage its euro status.

The facility near Florina, a town known as “Where Greece Begins,” is the most modern of four production units that state-controlled Public Power Corp. SA (PPC) is scheduled to sell to competitors to meet four-year-old European Union demands that the country deregulate its energy market. The most powerful Greek union is now threatening nationwide blackouts at the height of the summer tourist season to derail the plan.

“We will make saving PPC a cause for all Greeks,” Nikos Fotopoulos, head of the 18,000-strong GENOP union, said last month in his Athens office adorned with photos of communist revolutionaries including Vladimir Lenin and Leon Trotsky. “We fight our battles with faith and passion, and we fight them hard. A serious state must control businesses of strategic importance.”

While on the surface PPC is another tale of Greek conflict during the worst economic crisis of modern times, it encapsulates how Greece has found itself at the sharp end of Europe’s struggle to keep the euro intact and what the country still faces to defend its place in the currency.

Founded in 1950 to distribute domestically generated electricity to Greek citizens, PPC is a microcosm of political protection, vested interests and reliance on foreign financing that have defined the economy for decades.