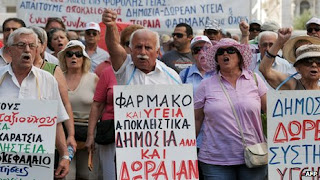 Few in Greek society have escaped the effects of the country's austerity programme. But it is Greece's elderly who may be suffering the most. Falling pensions, rising taxes and pressure on family support networks are causing stress for many.

Leo is a stout 64-year-old whose twinkly eyes are framed by a mane of long grey hair and a bushy beard.

Last year, unable to make ends meet, he joined the ever-growing numbers of homeless on the streets of Athens.

Although his son, who is in his 20s, supports Leo in every way he can, his own circumstances prevent him being able to house his father.

But Leo counts himself lucky because he has a bed in one of the few shelters in the capital.