Greece fails to muster enthusiasm for 2012 Olympics despite ties 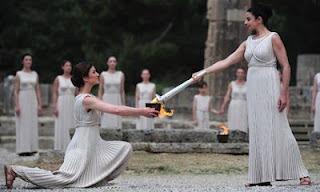 Few events trigger greater national pride than the sight of Greece's Olympians striding into the stadium at the start of the biggest show on earth. By dint of their contribution to the Games – as birthplace of the ancient Olympics and cradle of their modern reincarnation – the Greeks always enter the arena first. And so it was on Friday. But this time, as the delegation kicked off the parade, there was no hiding the truth.

The smiles and laughter that are part of the enthusiasm of the moment could not conceal the dark mood that appears to have taken hold of the team – and the nation at large.

A litany of incidents, many improbable, account for the gloom. The assertion by Jacques Rogge, the president of the International Olympic Games, that the Games "are coming home tonight" – made during his speech to assembled spectators at the opening ceremony – immediately triggered howls of protest.