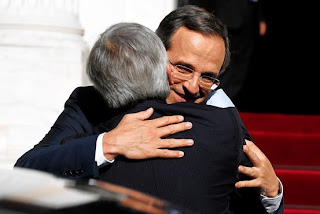 A top European official on Wednesday warned that Greece faced a "last chance" in proving its credibility to international creditors, and said a decision on Athens's proposal to extend deadlines on overhauls wouldn't come until after inspectors visit next month.

Speaking after a meeting with Greek Prime Minister Antonis Samaras, Eurogroup chief Jean-Claude Juncker said Greece must step up its efforts to cut its budget deficit and enact economic overhauls.

"As far as the immediate future is concerned, the ball is in the Greek court," he said. "In fact this is the last chance and Greek citizens have to know this."

But he reiterated his hopes that Greece would remain in the euro.

"I am totally opposed to the exit of Greece from the euro area," he said, adding that Greece's departure would pose a "major risk" for the currency bloc. 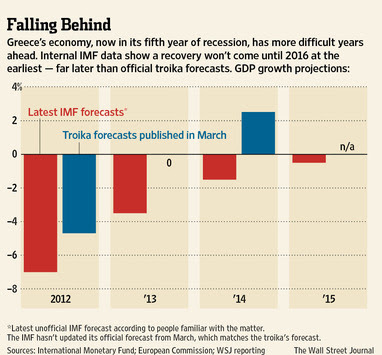 Posted by Aristides N. Hatzis at 2:20 AM