Greece can unbind itself from torment 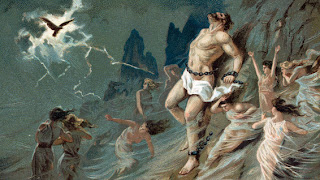 In Greece’s present day context, one has to wonder whether it might not have been more apt for Prof Pagoulatos to have considered the alternative Greek myth about the punishment Zeus meted out to Prometheus by binding him to a rock and having an eagle eat out his liver on a daily basis.

For much in the same way as Prometheus was bound to a rock and had an eagle administer him daily punishment, Greece is now bound to the euro and has the troika administer to it daily punishment through excessively severe budget austerity that has already plunged the Greek economy into a depression of epic proportions.

More
Posted by Aristides N. Hatzis at 8:41 AM