Greece Back in Focus; Investors Not Pleased 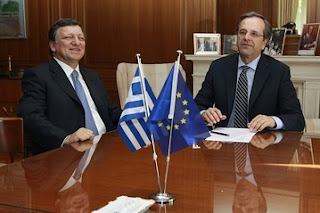 Greece is once again stirring up worries for investors.

The nation’s prime minister is set to meet with euro-zone leaders to assess the progress of reforms required to receive financial bailouts. Greek Prime Minister Antonis Samaras has said his country needs more time to implement spending cuts and other reforms.

Dow Jones Newswires is reporting Greece’s new government has a proposal that would give it two more years to meet its deficit targets. But the proposal may provoke intense disagreements among the country’s creditors on how to cut its debt mountain down.