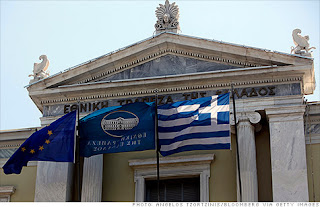 It looks like Greece will be able to make its latest bond payment next week, thanks to some creative financing.

The Greek government sold over €4 billion worth of three month bills on Tuesday, which analysts say will be used to repay €3.2 billion in bonds held by the European Central Bank that mature on August 20.

Greek banks were the main buyers at Tuesday's auction, because most outside investors are still unwilling to lend money to Athens.

However, since the ECB decided in July to stop accepting Greek government bonds as collateral, Greek banks have been dependent on the Greek central bank for emergency liquidity. The banks are widely believed to have used central bank money to buy the bills.

"Greece has basically been feeding off the eurosystem at one window to repay it at another," said Nicholas Spiro, director of London-based consultancy Spiro Sovereign Strategy, referring to the group of 17 eurozone central banks. "It's just a recirculation of the funds."

The immediate goal is to avoid a messy default that could force Greece out of the euro currency union and set off a market panic that drags down Spain and Italy.