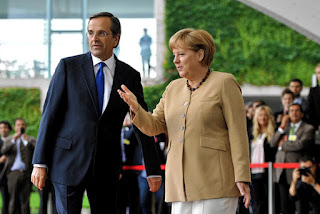 German Chancellor Angela Merkel said she wants to keep Greece in the euro zone through a regime of painful austerity, after Greek Prime Minister Antonis Samaras made an impassioned appeal that after six years of recession his beleaguered country needs breathing room.

The two leaders were speaking at a news conference Friday after talks in the Berlin chancellery, capping a week in which Berlin and Athens exchanged verbal blows in the media over whether Greece should be allowed to slow down its efforts to overhaul its economy and cut its deficit. Mr. Samaras has argued in a series of high-profile interviews that Greece needs time to get its economy growing again. Ms. Merkel insists Greece stick to its commitments.

"I want Greece to remain a part of the euro zone and that's what I am working on," Ms. Merkel said. "We expect from Greece that the promises that were made are implemented, that actions follow words."

The chancellor didn't comment directly on the time extension, but said Germany doesn't pass "premature judgments" and would wait for a report from creditor inspectors.

More
Posted by Yulie Foka-Kavalieraki at 12:48 AM