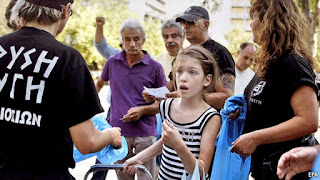 “We are providing food produced in Greece for Greek citizens only.” Ilias Kassidiaris, spokesman of Golden Dawn, sounded adamant gesturing towards a queue of hundreds of shabbily dressed, mostly elderly people waiting on August 1st for a handout of food aid in Syntagma Square outside parliament. A line of young women and men wearing the right-wing party’s trademark black T-shirts checked identification before giving grateful recipients a plastic carrier bag filled with fruit, vegetables and pasta.

Golden Dawn is Europe’s most recently successful far-right party. It won 6.9% of the vote and 18 seats, mostly in Athens, at parliamentary elections in June. Nikos Michaloliakos, the party’s founder and leader, insists his is not a neo-Nazi group, despite a swastika-like official symbol and the Nazi-style salute from party members when he appears on a podium. Golden Dawn’s voters include many police officers, disaffected young Greeks and older people living in city districts with high rates of crime.

The party has gained some credibility thanks to its food handouts and other social efforts, yet its overt racism, anti-Semitism and taste for violence disturbs many Greeks. “This party has a strong hooligan element as well as connections with the criminal underworld,” says Yiannis Boutaris, the mayor of Thessaloniki, who was criticised by Golden Dawn for backing the city’s first gay-pride celebration.

Posted by Yulie Foka-Kavalieraki at 5:07 PM