People vs. banks, north vs. south, and rich vs. poor? While all of these conflicts may be real, one of the biggest issues of the euro crisis is rarely discussed: Older people are living at the expense of the young, and it's high time the next generation took to the streets to confront their parents.

"Que se vayan todos," or "Away with all of them," became one of the slogans chanted by the tens of thousands of "Indignados" in Spain at protests last year. In addition to their eponymous outrage, many had one thing in common: Most were young and viewed themselves as victims of the crisis.

They might have been more specific and instead chanted: "All the old people must go!" This phrase would apply because, in many ways, the euro crisis is also a conflict between generations -- the flush baby boomers in their fifties and sixties are today living prosperously at the expense of young people.

Intergenerational equity -- measured among other things by levels of direct and hidden debts and pension entitlements -- is particularly low in Southern Europe. In a 2011 study of intergenerational equity in 31 countries by the Bertelsmann Foundation, Greece came in last place. Italy, Portugal and Spain didn't do much better, landing in 28th, 24th and 22nd place respectively. Currently, the unequal distribution of income and opportunities is particularly distinct:
More 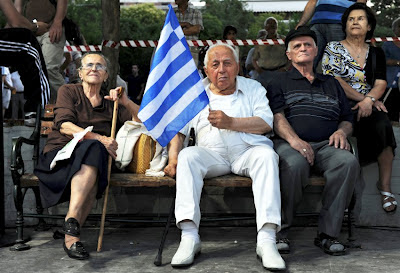 Posted by Yulie Foka-Kavalieraki at 6:10 PM