Athens Shows Its Commitment to Austerity 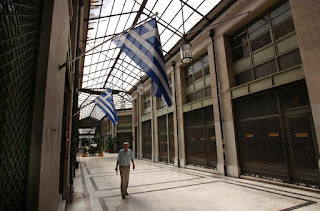 Many German politicians accuse Greece of not doing enough to cut spending. But studies show that, measured in relative terms, Athens has carried out the most brutal austerity program in the EU's history. Prime Minister Antonis Samaras is making it clear that he wants to change his country's culture of cronyism.

When Antonis Samaras travels to Berlin on Friday, his role will be clear: Greece's conservative prime minister is coming as a supplicant who is being forced to ask for more financial assistance in Germany for his hard-hit nation.

Still, calls for more time to implement austerity measures in Greece have already met with resistance in a broad section of the German government. "Europe and the euro cannot be allowed to fail because people refuse to implement reforms," Economics Minister Philipp Rösler told SPIEGEL ONLINE on Sunday. And the accusation being heard in the run-up to Samaras' important meeting with German Chancellor Angela Merkel is that the Greeks are exactly these kinds of reform refuseniks.

However, the reality is much different. Measured according to GDP, the Greeks are clearly making much deeper cuts than all other crisis-hit countries in the euro zone. This was recently confirmed by a study from the central bank of Ireland, which itself has a reputation as a model cost-cutter. The report finds that, since 2010, Greece has responded to pressure from the European Union and the International Monetary Fund by slashing expenditures and raising taxes worth the equivalent of 20 percent of GDP -- which represents the most brutal belt-tightening program in the history of the EU. This achievement is particularly noteworthy given the fact that it has taken place in the midst of a severe recession.

Given these circumstances, why do there continue to be doubts about the seriousness of the Greeks' efforts? On the one hand, this results from the fact that, despite all the cuts, Greece's debt burden will continue to grow if its economy doesn't grow as well. On the other hand, media reports about phantom retirees or bureaucratic chaos continue to create the impression that ongoing waste in other areas will negate all of the successful belt-tightening efforts.