The troika is coming 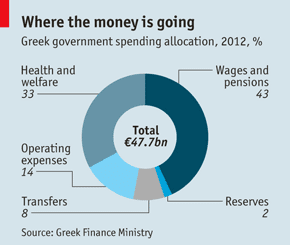 Tempers frayed this week, as Greece’s new coalition government tried, and failed, to find €11.5 billion ($14 billion) of spending cuts demanded by the European Union (EU) and IMF in 2013 and 2014 as part of the country’s second international bail-out. “Some ministers didn’t seem to realise their budgets need to be slashed, not trimmed,” fumed a finance ministry official.

Yet one culprit, Antonis Roupakiotis, the justice minister, noted that his ministry’s allocation of increasingly scarce funds has already shrunk from €950 million in 2009 to €550 million this year. Mr Roupakiotis claimed that fresh cuts would result in a near-collapse of the judicial process. It is already plagued by inadequate court facilities and long delays in reaching judgments—especially in cases involving alleged corruption and tax evasion.

After a week of number crunching, the team led by Yannis Stournaras, the technocratic finance minister, was able to present only about €7.5 billion of cuts for approval by the coalition government’s three political leaders. About €4 billion of the cuts would come from reductions in social spending and from imposing a ceiling on public-sector pension payments of €2,400 a month, as well as barring Greeks from drawing two separate pensions.