The tourists who could save Greece are the rich of China and India, not Europe

"We had a splendid time at the Villa Paradiso," we wrote in the visitor's book after a fortnight of hot, cloudless days and warm nights, tickled by the villa's name and keen to see it on the page. Everyone agreed that it might have come from an old-fashioned thriller – "Murder at the Villa Paradiso" – though the house was new and lay at the end of a field in Greece, rather than on a moonlit headland on the Cote d'Azur.

Every day began the same way. First, at some distance, cocks crew and dogs barked. Then the birds began their dawn shrieking, a din that settled down eventually to the steady cooing of doves and pigeons, one of which went through the whole day with the first four notes of Autumn from Vivaldi's Four Seasons — coo-coocook-coo, coo-coocook-coo — without ever getting further into the piece. The crickets started up when the sun hit the trees. We sat on the terrace and ate our breakfast of yoghurt and honey as swallows, or perhaps swifts, swooped across the pool in front of us. The sea shone silvery blue at the end of the valley. This was the life! From the damp perspective of London it seems long ago, but it was only last week.

Greece intended to build its economy on people like us: sun-seeking tourists from northern Europe and North America, rich enough to spend two or three weeks every year in a hotel or a rented villa, to hire a car, to eat in tavernas and buy wine and peaches in the local mini-market. Our island, Kefalonia, had come quite late to this game. The guidebook said that the stubborn and suspicious nature of the inhabitants had kept development at bay until the late 1980s, though a more likely cause of the island's relative under-exploitation is the great earthquake of 1953, which ruined most of its towns and villages and prompted many Kefalonians to migrate to Australia. Many of its villages disappeared for good, but the towns were rebuilt, for the most part charmingly, and the popular success of Captain Corelli's Mandolin as both a novel and a film has given Kefalonia a more attractive kind of fame, and helped fill the flights from Manchester and Gatwick. 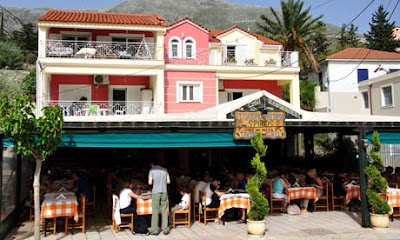 Posted by Yulie Foka-Kavalieraki at 12:35 AM