Greece's crisis: The parable of the four-engined planes 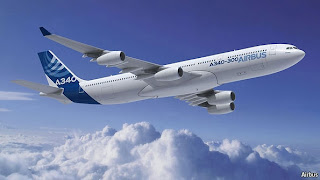 An old friend in the aviation business, with years of experience with Greek clients, told me a story that serves as a parable for how the country got into its current state. It concerns the sale of four Airbus long-haul planes after the national flag carrier, Olympic Airways, went bust. In 2007 an American valuation consultancy, Avitas, put a value of $45m on each of the A340-300 planes, which were then eight years old and still airworthy. Offers by outside firms to handle the sale were turned down. Instead a special state-owned firm with hundreds of employees was established, just to flog the four surplus planes.

In 2010 a small German airline called Cirrus offered $23m each for them. But the Greeks rejected this because of a rule that state assets could not be sold for less than 75% of their declared value. They then called for another expert valuation on the planes, which by then had been grounded for a year: the valuers marked them down to just $18m each.

By then, this tiny part of the secondhand airliner market was becoming flooded with this type of four-engined aircraft, which had been made uneconomic by high fuel prices. This, and the deteriorating state of the grounded planes, pushed their value steadily lower. By 2012, after three years sitting unused and un-serviced in the humid atmosphere of Athens, the only offer was from Apollo Aviation in Miami, which wanted the planes for scrap. The Greek trade unions kicked up a fuss about state assets being flogged cheaply abroad. But the deal was eventually sealed by the new government earlier this month, with the planes being sold for just $10m each.