Prepare for an even bigger U-turn from Ms Merkel 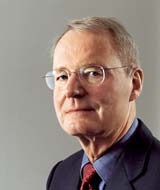 In agreeing to help bail out Spanish banks and enter into a virtual banking union, albeit with strings attached, Angela Merkel lost an important battle. It was not the first time. While Europe’s media call her “Madame No”, in reality she is more of a Neville Chamberlain than a Margaret Thatcher. This time, it is the Germans who are being blackmailed – by the French. It all started in early 2010, when Ms Merkel suggested Greece leave the eurozone. After Nicolas Sarkozy threatened her with ending the special French-German relationship, she gave in and helped to bail out Greece. That turned out to be a bailout of French banks. Since then, every time she has drawn a new line in the sand, the French have pushed her over it. When she demanded automatic sanctions against violators of the euro’s financial targets, Mr Sarkozy talked her out of it at Deauville. For decades, German chancellors resisted the French idea of a European economic government, until Ms Merkel adopted it. Not long after she proclaimed a Financial Transaction Tax “counterproductive”, she joined the French in their fight for it.

France can expect further concessions by Germany. While the “debt brake” (designed to stop politicians piling up debts) is now part of the German constitution, François Hollande refuses to make it part of France’s, though promised by his predecessor. Such a debt brake in the second largest eurozone country would have been of fundamental importance to Germany. With Mr Hollande, the risk of France herself becoming a bailout candidate is rapidly growing. While Germany has extended the retirement age to 67, Mr Hollande has started reducing it from 62 to 60. Though France’s youth unemployment rate is four times higher than Germany’s, Mr Hollande has raised the minimum wage to a record level. Last year, the French budget deficit ratio was more than three times as high as Germany’s. There is to be no austerity programme to speak of in France.

While Lady Thatcher always wanted her money back, Ms Merkel spends her money to save the euro. No wonder that the chief editor of Le Figaro once stated the euro was a new Treaty of Versailles, without going to war.