Interview with Finland's Finance Minister: 'Our Solidarity Is Limited' 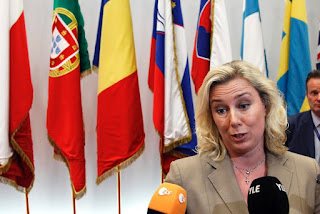 Finland reached a deal with Greece and Spain to get collateral in exchange for its share in any bailout packages. The deals are controversial, with critics worried that they may herald a quiet Finnish exit from the euro. In a SPIEGEL interview, Finance Minister Jutta Urpilainen, 36, defends the policy, saying her country wants to keep the euro intact.

SPIEGEL: Ms. Urpilainen, Finland is the only country in the euro zone that has secured a guarantee in exchange for billions in aid to Spanish banks. Can you now sleep more soundly?

Urpilainen: I feel safer, yes. We need collateral, because we as a government are bound by a coalition agreement on this. It is important to be careful with the money of the taxpayers. That is why we find it good that the taxpayers receive something in return for public loans.

SPIEGEL: What does the collateral you received from the Spanish for Finland's part in European rescue package consist of?

Urpilainen: The collateral is given by the Spanish deposit guarantee fund. Its total amount is approximately €770 million ($933 million), in case the Spanish need €100 billion. That is 40 percent of our share and should therefore cover the risk for our taxpayers.

SPIEGEL: Finland will also get a guarantee if Greece goes bankrupt. Have you received Greek islands as collateral?

Urpilainen: We have received bonds issued by solvent countries like Germany with a value of about €900 million as collateral. The mechanism is quite simple: whenever the Greeks request more money, our collateral increases.