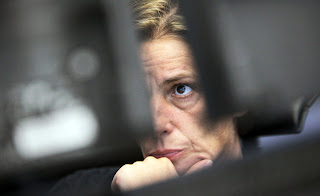 Signs that cracks in the euro zone are widening sent markets on the Continent down sharply on Monday, as doubts grew about Greece’s ability to make good on its debt payments and Spain’s economy — the region’s fourth largest — was straining under the pressure of the government’s austerity measures.

Additionally, in a blow to the euro zone’s most stable countries, Moody’s Investors Service late Monday cut the outlook for its AAA credit ratings for Germany, the Netherlands and Luxembourg to “negative” from “stable.” The agency cited the fallout from an increased likelihood of a Greek exit from the euro and possible greater costs for supporting countries like Spain and Italy.

In recent years, financial turmoil has tended to materialize in August, when the trading volumes in stocks, bonds and currencies shrink, making it easier for sellers — no matter their size — to move markets as they head to the hills, or the beach, for a long holiday.

All signs again point to a nerve-racking end of summer.