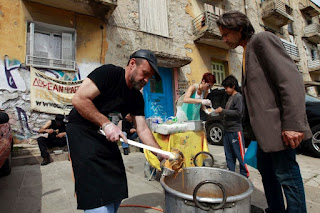 Financial inspectors from the troika have arrived in Greece to draft their final report on whether the country has made enough progress with its austerity and reform efforts. But many Greeks have already lost hope and are counting on the worst -- an exit from the euro zone.

An aluminum bowl filled with pasta, a bottle of water and a bread roll. "The most important thing is that it quiets your hunger," says Yannis. The 63-year-old is leaning on the wall of a building on Sophocles Street spooning up his lunch. He spent the last half-hour waiting in line outside a soup kitchen in downtown Athens. He says he doesn't have any money for food, adding: "I earn €500 ($600), of which €200 goes to rent alone."

Yannis numbers among the more than 400,000 people in the greater Athens area that rely on free food for their daily survival. He doesn't harbor any illusions anymore -- either about his future or that of his country. "I don't know how they expect to keep squeezing people like me anymore. There's no more to squeeze. Should I throw myself off a high-rise to unburden the state?"

People like Yannis can say what Greece's social reality feels like these days. In particular, he can convey the frustration that has come to grip almost all levels of society. Many have had to accept layoffs, losing up to half of their income and pension cuts, on top of which comes an endless stream of new taxes and fees. They've had to watch as stores shut down and entire city neighborhoods become run-down. They've also observed how pharmacies have turned to dispersing medications for cash only, and seen the number of drug addicts and suicides rise.

Sharan Burrow, the general secretary of the International Trade Union Confederation (ITUC), recently visited Greece. She says she saw a country in which people are "losing hope." She added that people told her that they "are frightened to have children because they will not be able to support them."