Nearly 90 factories hummed in an industrial park here when Greece joined the euro. Only 26 are active today.

The industrial decline on this mosquito-ridden coastal plain in northern Greece explains much about how the common currency compounded economic problems in southern Europe, and shows why emergency summits of European leaders alone can't cure the region's economic crisis.

Greece, like other euro members that now need financial help, struggled to compete in the European and global economies as cheap credit and structural problems inflated prices and wages faster than its palette of products could justify. Now, lacking a national currency that can depreciate to make its goods cheaper in foreign markets, it must embark on a grinding "internal devaluation," pushing down its wages and prices.

"When we became one with Europe in currency, many Greeks thought we were all one economy," says Dimitris Petsas, whose underwear factory is one of Komotini's survivors. "We forgot that we have to actively export, to bring the euros of Germany and core Europe to Greece." Instead, he says, "the core countries stripped us naked." 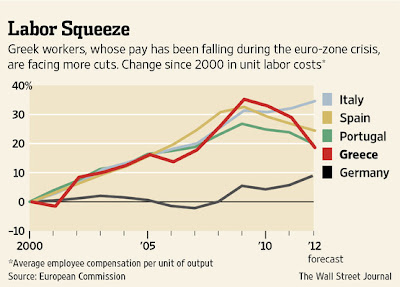 Posted by Yulie Foka-Kavalieraki at 8:38 AM