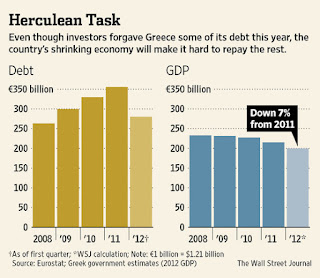 International inspectors arrived in Greece this week to uncover just how far months of political uncertainty have pushed the country's rescue program off track.

The findings of experts from the European Commission, the European Central Bank and the International Monetary Fund, to be reported to euro-zone governments in September, will set up a period of tense negotiations during which Greece's future in the common currency could be decided.

The choices will, to a point, be familiar: Policy makers could decide to force Athens to make more spending cuts; they could agree to provide it with yet more bailout money; or they could decide to take losses on the money Greece owes them. But this time, the stakes are higher and the chances of success appear diminished: Added austerity threatens even more punishment to the Greek economy, while attitudes of some euro-zone politicians to Greece are hardening.

That raises a fourth option, of Greece abandoning the euro.

More
Posted by Yulie Foka-Kavalieraki at 12:25 AM