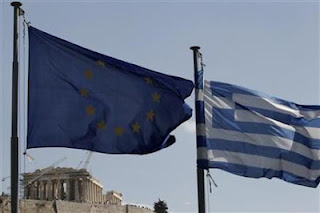 Greece is unlikely to be able to pay what it owes and further debt restructuring is likely to be necessary, three EU officials said on Tuesday, a cost that would have to fall on the European Central Bank and euro zone governments.

The officials said that twice bailed-out Greece would be found to be way off track by EU and International Monetary Fund officials who have been assessing the country.

Inspectors from the European Commission, the ECB and the IMF -- together known as the troika -- returned to Athens on Tuesday and will complete their debt-sustainability analysis next month, but the sources said the conclusions were already becoming clear.

It means Greece's official-sector creditors -- the ECB and euro zone governments -- will have to restructure some of the estimated 200 billion euros of Greek government debt they own if Athens is to be put back on a sustainable footing.

But there is no willingness among member states or the ECB to take such dramatic action at this stage.

"Greece is hugely off track," one of the officials told Reuters, speaking on condition of anonymity because of the sensitivity of the issue. "The debt-sustainability analysis will be pretty terrible."

Another official pointed to the latest growth estimates from Athens, which show the economy contracting by 7 percent this year rather than the 5 percent previously forecast, meaning that the debt burden is only increasing in relation to GDP.

"Nothing has been done in Greece for the past three or four months," said the official, referring to the delays caused by the two elections held since May.

"The situation just goes from bad to worse, and with it the debt ratio," said the official, a policymaker directly involved in trying to find solutions to the crisis.