Germany, France Back Pledge to Save Euro 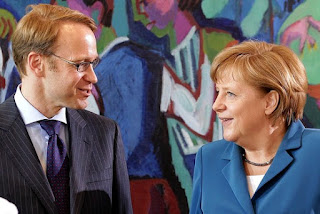 The leaders of Germany and France threw their weight behind European Central Bank President Mario Draghi's pledge to protect the euro with decisive action, delivering a crucial political endorsement for the ECB's use of its printing press to buy beleaguered nations' bonds.

Ms. Merkel and Mr. Hollande held a phone conference Friday and released a statement saying they are "deeply committed" to the euro zone and "determined to do everything to protect it." In a reference that seemed to endorse Mr. Draghi's remarks, the leaders said euro-zone member states and European institutions must live up to their responsibilities in their areas of competence.

The public display suggests that Mr. Draghi's comments were part of an orchestrated effort among the region's key power centers to calm restive markets.

More
Posted by Yulie Foka-Kavalieraki at 8:19 AM