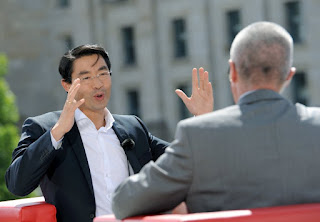 German Economy Minister Philipp Rösler has been accused of being reckless and unprofessional after saying he is skeptical that Greece's reform efforts will succeed and that a Greek exit from the euro had "lost its horrors." But some senior members in Germany's ruling coalition agree with him.

German Economy Minister Philipp Rösler, leader of the pro-business Free Democratic Party (FDP), has come under fire for comments he made about Greece on Sunday that contributed to uncertainty in financial markets on Monday, when the euro fell to its lowest level against the dollar in more than two years.

Rösler was accused of being reckless and unprofessional by saying in a television interview that he was "more than skeptical" that Greece's reform efforts will succeed.

"If Greece no longer meets its requirements there can be no further payments," he said in an interview with German public broadcaster ARD. "For me, a Greek exit has long since lost its horrors."

The FDP, junior coalition partner to Chancellor Angela Merkel's conservative Christian Democratic Union (CDU) party, has been struggling to recover from a slump in opinion polls and has adopted a euroskeptic tone in the crisis, warning about the costs of bailouts to German taxpayers.

Rösler, as head of the FDP, is also deputy chancellor.

A fellow FDP member, Michael Link, a state secretary in the Foreign Ministry responsible for European policy, warned on Monday against making self-fulfilling prophecies and said the German government's position was that no country should be pressured into leaving the euro zone. "If it is possible to keep it together, we should do it," he said of the euro zone, speaking on the sidelines of an EU foreign ministers' meeting in Brussels.

Jorgo Chatzimarkakis, a Greek-German member of the European Parliament for the FDP, was less diplomatic. He said he was astonished by the "extent of unprofessionalism" in Rösler's comments.