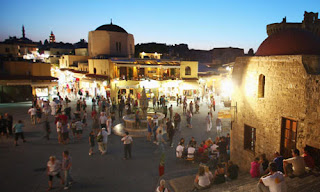 International tourists are shunning Greece, and hampering the country's economic recovery, as figures reveal that holidaymakers are deterred by the country's role in the eurozone debt crisis.

The fall in the number of foreign visitors is a blow to a country that largely relies on tourism. Nearly 11% fewer tourists came to Greece between January and May than a year earlier, according to latest figures from the Bank of Greece. Holidaymakers who travelled to Greece spent €1.48bn (£1.2bn), 12.5% less than in the same period last year.

The figures do not bode well for Greece's attempts to keep to its deficit reduction plan. Tourism makes up 16.5% of the economy, the largest single contributor, and one in five Greeks work in the industry. Last week officials from the IMF, the European Union and the European Central Bank – the so-called troika – warned that Greece had strayed from its cost-cutting plan, amid estimates that the economy is contracting by 7% this year rather than the 5% previously forecast.

Uncertainty over whether Greece will stay in the euro, and two national elections in May and June that attracted global media coverage, put people off spring breaks in the Mediterranean country, although last-minute bookings appear to have picked up.