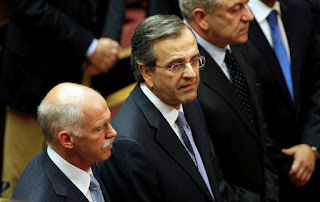 Only a month after Greece installed a new government, the country is facing renewed peril. Its official lenders are signaling a growing reluctance to keep paying the bills of the nearly bankrupt nation, even as the government is seeking more leniency on the terms of its multibillion-euro bailout.

Adding to the woes, there is little agreement within either side. The Greek government is itself a motley coalition of conservatives and Socialists, and the leaders of the European Commission, the International Monetary Fund and the European Central Bank, known as the troika, are increasingly divided among themselves. That is creating even more uncertainty as Greece and the rest of Europe head for yet another showdown, renewing doubts about how long Athens can remain within the euro zone.

Even as fears mount in Europe about the rapidly worsening situation in Spain, Greece’s problems are far from solved. The president of the European Commission, José Manuel Barroso, is expected to make his first visit to Athens since 2009 on Thursday to meet with Prime Minister Antonis Samaras as the troika begins yet another assessment of how well the country has complied with a spate of harsh austerity measures imposed as the price for loans. Greece’s lenders say they will not finance the country any further unless it meets its goals. But many experts say that the targets were never within reach and that pushing three increasingly weak Greek governments to comply has only profoundly damaged the economy.

“We knew at the fund from the very beginning that this program was impossible to be implemented because we didn’t have any — any — successful example,” said Panagiotis Roumeliotis, a vice chairman at Piraeus Bank and a former finance minister who until January was Greece’s representative to the International Monetary Fund. Because Greece is in the euro zone, he noted, the nation cannot devalue its currency to help improve its competitiveness as other countries subject to I.M.F. interventions almost always are encouraged to do.

More
Posted by Yulie Foka-Kavalieraki at 7:57 AM