Euro EUphemism: François Hollande is trying to wriggle out of Germany’s demand for more political union 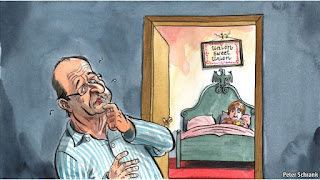 France's political discourse these days is rich with euphemisms. The words austérité or rigeur are shunned, though everybody knows that spending cuts must come soon. Instead the government of François Hollande prefers to speak of redressement, or “putting right” public finances. And when it comes to the euro crisis and Germany’s demand for greater political union, Mr Hollande responds with the artful phrase: intégration solidaire, or integration with solidarity.

Precisely what Mr Hollande means by this is as important to the future of the euro as Germany’s willingness to accept further risk-sharing. The euro zone is descending into the next circle of misery, with investors fleeing Spain and the mess in Greece returning to the fore. Above all, markets have lost confidence in the future of the single currency. The task of political leaders is to prove that they intend to keep it.

So Germany is being urged to stand behind the euro by accepting the pooling of sovereign debt and collective action to shore up the banking system. Angela Merkel, the German chancellor, says that if there is to be any mutualisation of liabilities, there must be greater central control. That means giving European institutions more power to determine national budgets and economic policies, and to oversee the financial sector. And such power must be legitimised by democratising EU bodies and strengthening the European Parliament.