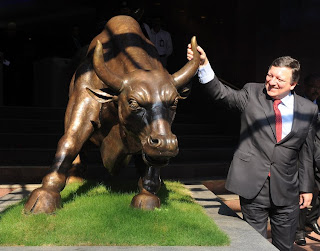 European Commission President Jose Manuel Barroso has a reputation for avoiding conflict. But as the euro crisis has worsened, his power has increased. He is one of the few winners of the problems facing Europe's common currency.

When José Manuel Barroso launches into one of his notorious PowerPoint presentations in the conference hall of the European Council building in Brussels, the mood among European Union leaders present quickly begins to resemble that of an endless vacation slide show in someone's living room. While grandpa waxes lyrical over his photos of Alpine wildflowers, the rest of the family reaches for snacks and hopes the show will soon end.

With each new slide that the Commission president pulls up on table monitors, his enthusiasm for the achievements and initiatives of his own organization grows, while the 27 heads of state and government resign themselves to their fate. The most recent Brussels summit was no different. EU leaders leaned back into their chairs, confident that Barroso's presentation would not prove particularly demanding.

This time, though, they were wrong. When some European leaders raised objections to the fiscal policy recommendations from Brussels, the Commission president fired back. He reminded those assembled that they were the ones who had given the Commission the right to set parameters for national governments. It didn't make any difference to him if they continued to play their little tactical games, he said, noting that he would prefer to stick to facts. And then Barroso said heatedly: "If the European Council doesn't sign off on these recommendations, we'll have a serious problem."

The leaders were shocked. Was this Barroso speaking? It certainly wasn't the Barroso they'd grown accustomed to.

José Manuel Durão Barroso, 56, has been the head of the most powerful EU institution for eight years. More than 32,000 people ultimately report to him, and he is part of every crisis summit. Yet he has long since proven himself to be reliably risk-averse. The head of the EU executive branch, essentially the chief executive of the union, rarely demanded things that others hadn't already demanded before.