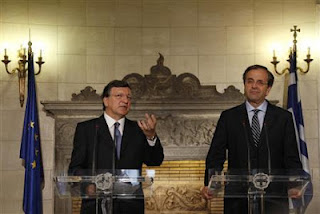 European policymakers are working on "last chance" options to bring Greece's debts down and keep it in the euro zone, with the ECB and national central banks looking at taking significant losses on the value of their bond holdings, officials said.

Private creditors have already suffered big writedowns on their Greek bonds under a second bailout for Athens sealed in February, but this was not enough to put the country back on the path to solvency and a further restructuring is on the cards.

The latest aim is to reduce Greece's debts by a further 70-100 billion euros, several senior euro zone officials familiar with the discussions told Reuters, cutting its debts to a more manageable 100 percent of annual economic output.

This would require the European Central Bank and national central banks to take losses on their holdings of Greek government bonds, and could also involve national governments also accepting losses.

The favored option is for the ECB and national central banks to carry the cost, but that could mean that some banks and the ECB itself having to be recapitalized, the officials said.