ECB Divided over Efforts to Save Euro 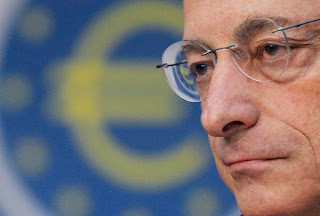 ECB head Mario Draghi wants to save the euro at all costs. But the pledge has created discord within the bank's governing council. Many oppose plans to buy up sovereign bonds from troubled euro-zone member states, fearing it could just make things worse.

It was an illustrious meeting that British Prime Minister David Cameron was hosting on the evening before the opening of the Olympic Games in London. Prince Charles joked with International Monetary Fund Managing Director Christine Lagarde, while top chef Tom Aikens served up Scottish salmon and Yorkshire goat cheese. The heads of global corporations like Google enthusiastically applauded the videotaped appearances of English celebrities, from Victoria Beckham to Richard Branson.

It was meant to be a day of glamour, but then Mario Draghi, the president of the European Central Bank (ECB), made a seemingly trivial remark -- but one that ensured that the 200 prominent guests were swiftly brought back to gloomy reality. His organization, he promised, would do "whatever it takes to preserve the euro."

The audience treated the remark as just another platitude coming from a politician. But international financial traders understood it as an announcement that the ECB was about to buy up Italian and Spanish government bonds in a big way. So they did what they always do when central banks suggest they might soon be firing up the money-printing presses: They clicked on the "buy" button.

Stock and bond prices shot up within minutes, and the yields on some southern European debt securities saw a considerable drop. Newspapers and online news services called it an act of liberation, and market speculators quickly concluded that the ECB was apparently prepared to provide them with what one banker called "excellent gains in share prices" in the coming months. 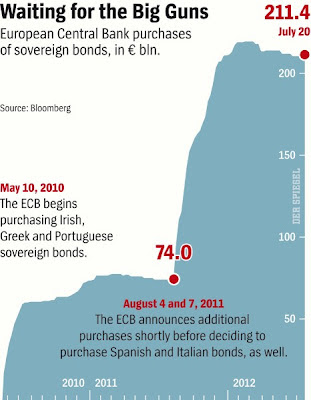