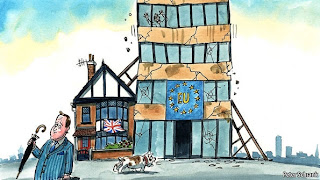 “Let Europe arise!” Such was Winston Churchill’s exhortation at the conclusion of his 1946 speech in Zurich envisioning a “United States of Europe”. Britain would not be part of it; it had its own empire and Commonwealth. But Churchill said Britain, and others, “must be the friends and sponsors of the new Europe”.

There is something of this Churchillian loftiness in Britain’s call for the euro area to follow the logic of integration and save the single currency—as long as Britain is not involved. But whereas Churchill is sometimes claimed as a forefather of the European project, the interventions of David Cameron only seem to rankle.

In part, Mr Cameron comes across as annoyingly triumphalist even though Britain’s economy has worse debt and deficit figures than, for instance, France. Most exasperating is the prospect that Mr Cameron could seek to hold others hostage, blocking moves to integrate the euro zone unless, say, they agree to loosen Britain’s ties with the European Union.

All are aware of the Eurosceptics’ agitation for an in-out referendum on whether Britain should remain in the EU. Mr Cameron says he is not for leaving the union but does want to renegotiate the terms of membership, and then perhaps put the result to a popular vote. Amid the talk of repatriating powers, William Hague, the foreign secretary, this month launched an audit of the EU’s authority.