'Acropolis Adieu, You've Got to Go!' 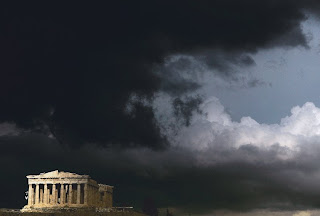 New speculation of a Greek exit from the euro zone hit financial markets on Monday after the IMF and major creditors including Germany were reported to be intent on refusing further aid. German media commentators don't see how Greece can avoid quitting the euro -- and say Athens has mainly itself to blame.

The euro fell to its lowest level in over two years, reaching $1.2081 on Monday, due to market fears of a Greek euro exit and calls by Spanish regions for financial aid that triggered speculation Spain may have to seek a full bailout.

Reports that the International Monetary Fund, Germany and other major lenders are not prepared to extend fresh aid to Greece on top of the second bailout package of €130 billion ($157 billion) agreed to earlier this year have sparked new speculation that the country where the euro crisis erupted in 2010 may have to declare bankruptcy this autumn and quit the euro.

The Greek government has asked lenders to soften the terms of the bailout and give it more time to implement reforms and budget cuts demanded of it. But that would probably require the injection of even more aid to Greece, which Germany and the IMF are reportedly no longer prepared to do.

German media commentators say a Greek bankruptcy is looking more likely and that despite all the mistakes made in Europe's crisis management over the last two years, Greece itself is to blame for its problems.