A New Idea to Save the Common Currency 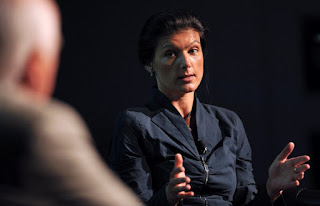 Germany's Left Party is not often associated with neo-liberalism. But a new proposal from a senior party member could provide a way out of the cycle of bailouts and bank aid. Why not just reboot the market economy and then cushion the fall?

If there is one thing that has seemed to characterize the euro crisis, it is the lack of alternatives. The common currency bailout fund, for example, had to be vastly enlarged to prevent financial markets from plunging the common currency zone into chaos. Spain had to be given billions in aid to prevent its banks from collapsing and making the situation even worse. The list of instances in which European leaders have made moves they've called mandatory is long.

Such tunnel vision, however, hasn't exactly led to a swift end to the economic woes sweeping across the Continent. Increasing numbers of economists and politicians are predicting that Greece will soon collapse into uncontrolled bankruptcy -- exactly the scenario that Europe has been struggling to avoid for the last two years. The €100 billion Europe has pledged to Spanish banks has failed to stop rising interest rates on the country's sovereign bonds. And both Madrid and Rome may ultimately have to apply for a full bailout, which would stretch the euro backstop funds to their limits. It seems time to start seriously considering whether there might be another way.

Two concepts are already out there, of course. There is the arch-liberal idea that, simply put, calls for allowing them all -- both the troubled banks and the deeply indebted countries -- to go broke. The resulting recession, of course, would be painful. But it is the necessary catharsis, proponents of this idea say, following past spending excesses.

Then there is the left-wing strategy, which calls for the immediate introduction of communitized European debt in the form of euro bonds in addition to a Continent-wide banking union. German taxpayers would become the primary backers of European debt, and a euro-zone-wide deposit guarantee would help ensure the stability of banks in the bloc. Other ideas tend to be a mixture of these two approaches.