Wolfgang Schaeuble: Germany ‘will do whatever it takes to defend the euro’ 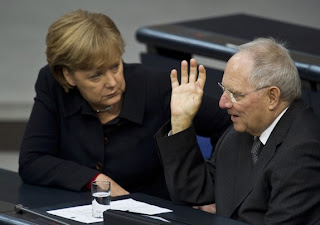 As Greece votes Sunday in an election that will shape Europe’s economic future, Wolfgang Schaeuble, Germany’s finance minister, remembers when decisions on the continent were made at gunpoint, not the ballot box.

Schaeuble, 69, a key ally of German Chancellor Angela Merkel, is one of the most powerful voices shaping Europe’s response to its economic crisis. For him, the European Union is not simply a pocketbook convenience but a project to avoid bloodshed. And through this crisis, he says, the bonds that tie Europe’s countries together can become even stronger.

With Spain and Italy on the brink of needing full-scale rescues and Greece in open rebellion against the painful austerity diktats that came as a condition of its two bailouts, Germany is pushing for unprecedented steps to transfer sovereign power to the European Union in exchange for sharing the burdens of borrowing and spending. Germany — Europe’s most powerful economy — would shoulder much of the burden of such an arrangement, and Schaeuble may be his country’s most passionate proponent of doing so.

“We will do whatever it takes to defend the euro,” Schaeuble, 69, said in an interview in the Reichstag, the home to Germany’s parliament that is itself a symbol of the tribulations of Europe’s 20th century. Russian graffiti covers many of its interior walls, left by troops who held the building in the waning days of World War II, and the building stands just feet away from what was once the Iron Curtain.