Troubled Greek Economy Is Being Left to Fend for Itself 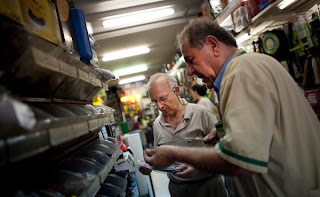 No matter what happens in this weekend’s elections, Greece is rapidly becoming an isolated economy.

Carrefour, the giant French supermarket and retail group, said on Friday that it was selling its entire stake in Greece at a loss to its local franchise partner, so it could concentrate “on markets where it sees growth,” a spokesman said.

Coca-Cola’s operations in Greece were also downgraded by Moody’s Investors Service, which cited the increased likelihood that Greece could exit the euro zone. A day earlier, the French bank Crédit Agricole said it was ring-fencing its Greek operations to protect itself should that happen.

Global businesses and investors are retreating both because of the uncertainty on whether they might be paid someday in a devalued currency, and because domestic consumption has plunged after three years of painful austerity.