Troubled Greece: fears of 'first domino' to fall as austerity is counted a failure

The soup kitchen opens at noon but long before then the queues start to form in the hot Athens sun. A couple of streets away from where sardines, red mullet and squid are piled high in the fish market, those down on their luck line up. While elsewhere life goes on seemingly as normal, students, jobless people, single parents and pensioners swallow their pride and wait patiently. They get two meals a day, at midday and 5pm. This is what a depression looks like.

At first blush, Greece seems no different from any other developed country. People sit in the city centre cafes sipping their iced coffees; yellow taxis cruise the streets; the shops are open for business. But different it is, and it is not hard to spot the signs that this is an economy that has contracted by 20% since the downturn began three years ago and that it is still falling.

You don't need to know that spending in the shops is down by a sixth over the past year; it is obvious from the empty cabs and those shops open but with no customers. You don't need to know that the official unemployment rate is well above 20% and youth unemployment is nudging 50%: it's obvious from the young men idling on street corners and openly dealing drugs. 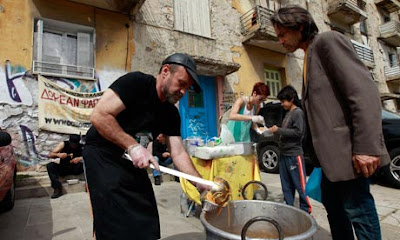 Posted by Yulie Foka-Kavalieraki at 9:57 PM