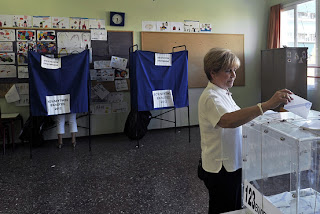 Greece's conservative New Democracy party eked out a slim victory in Sunday's elections and will seek to form a pro-austerity coalition government with other parties to take the immediate steps needed to comply with strict financial targets set by its international lenders.

The outcome is likely to ease fears—at least temporarily—of a Greek exit from the 17-nation euro zone, but political uncertainty is likely to continue as parties embark on contentious coalition talks, which, even if successful, may not result in a lasting government.

"Today the Greek people have expressed their will to stay anchored with the euro," Mr. Samaras told a packed news conference at Greece's Zappeio Hall, where Greek party leaders traditionally head to claim victory after national elections. "We will respect our signature and the country's obligations."