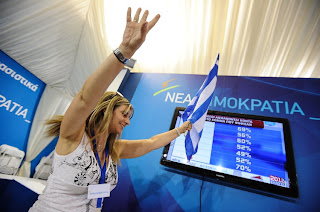 Official projections on Sunday evening showed the conservative New Democracy as having won the Greek election, whose outcome is seen as crucial to the euro zone's future. The party may be able to form a pro-bailout coalition government with the Socialists, but Greece could still face months of uncertainty.

The world has been watching Sunday's elections in Greece with bated breath, worried that the outcome could precipitate a Greek exit from the euro zone. Now it looks as if the two mainstream parties that support the bailout deal with the European Union and International Monetary Fund (IMF) may be able to form a government -- but Athens isn't out of the woods yet.

According to official projections on Sunday evening, conservative New Democracy looked set to finish first with 30.6 percent of the vote, followed by the left-wing Syriza party with just over 26 percent. The center-left Socialists (PASOK) were expected to come third with 12.8 percent.

The far-right Golden Dawn party was projected to receive around 7 percent of the vote, giving them 18 seats in parliament.

The party that finishes first gets a 50-seat bonus, meaning that -- if the projections are correct -- New Democracy and the Socialists would win at least 160 seats in the 300-seat Greek parliament between them. They could form a coalition government which would broadly support the EU-IMF bailout.